Landing in Cagliari airport and whisked off on a bus through the suburban landscape gives a rather contradicting view to the romantic landscape I had imagined Sardinia to look like. As with many European cities, there are empty concrete highways with graffiti which summon up Fitzgerald’s depiction of the empty quarter described in The Great Gatsby. As you turn the corner of the winding roads though, past the factories and marshlands home to flamingoes, the browns and murky yellows fade into beautiful blossoms of purple bougainvillea, palm trees and rustic fields leading up to the hills.

Sardinia as an island off the coast of Italy you may have thought would be primarily a fishing community but actually, village life centred around agriculture.Sardinia’s rugged terrain is beautiful with hills and flat planes and luscious palm trees..

The hardships and takeovers and continued survival of Sardinians is most memorably marked with the Festa di Sant’Antonio which takes place in May. The festival is a brightly coloured array of locals and livestock transporting a saint from Caliagari to Pula over four days. Each village is marked with traditional dress of varying colours that reveal how wealthy each community was.

Exploring Cagliari in the sunshine was wonderful, best done by foot as you climb up stairs to the churches and vantage points that look across the city; the streets are narrow and cobble stoned and the buildings painted in a spectrum of creams, yellows and terracotta. 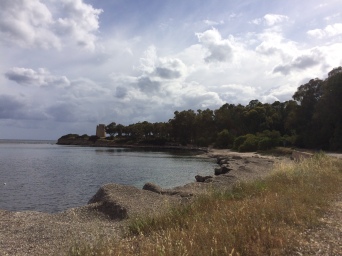 Forte Village, where I was staying is the home of Thalassotherapy – a salt water therapy treatment that was the original retreat for astronauts returning from space. The series of six pools with differing concentrations of salt was the perfect environment for astronauts to recover the affects of gravity as the high concentration of salt makes those swimming in the pool buoyant. As with the Dead Sea, it is fantastic for the skin and after a couple of days undergoing the hour it takes to complete the circuit, spa-goers are left with a glow and replenished looking skin.

The southern white sandy beaches are perfect for water sports and the clay coloured hillside great for cycling.

We dined at Le Dune restaurant in FV which simply served the best seafood and for three days we feasted on octopus carpaccio, John Dory, smoked salmon, tuna, squid ink spaghetti, pasta vongole, etc. The restaurant has a stunning glass window that frames the restaurant and offers calming views across the Med.