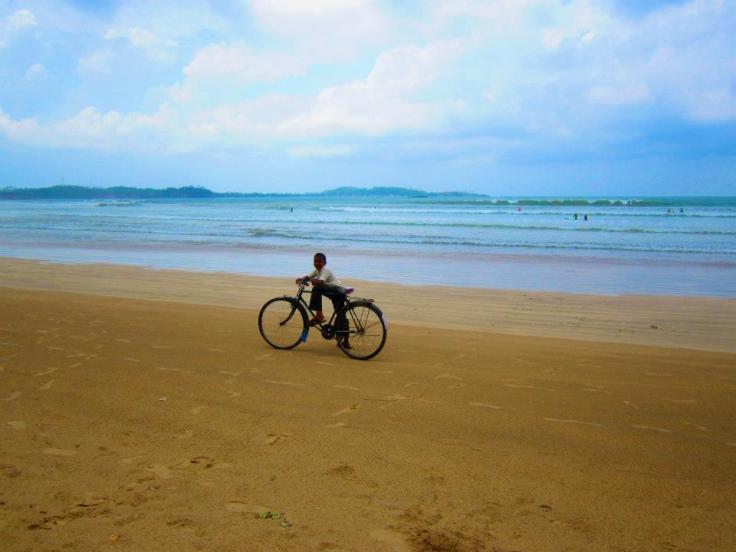 Last week I took a cheeky holiday to Sri Lanka with a friend of mine and it was wicked. Our plan was to do a little sight-seeing and then check out the surf in the south. Fortunately from Dubai, there are cheap, direct flights to Colombo daily which makes it a perfect destination for a quickie holiday.

Arriving at Colombo we made a hasty 5am decision to swap our travel plans around and visit Kandy first in order to get the best surf in.

After finding the bus ‘hole,’ we hopped  onto a very rickety old thing to Colombo Forte train station. As we chugged along the bumpy, winding journey, we were entertained by the bus conductor who called out  ‘AAAAAY Colombo-Colombo-Colombo-Colombo” continuously as he hung out of the doorway to the passer-bys.  Colombo’s a pretty funny place, incredibly chaotic with tuk-tuks and buses and vendors all over the place.

Due to both our budget and also general curiosity, we planned to get round the country using the trains. Despite being quicker than buses, the trains are not always the most timely, there are only 3 main train lines which all run to Colombo. This means that you often have to travel two sides of a triangle to reach your destination, nonetheless, they were pretty memorable train journeys.

Like the buses, the trains are packed. We bought our tickets and made our way to the platform about an hour before the train was due to depart. It was a little tricky, very few Sri Lankan’s speak English well and finding out the correct platform number is not straightforward. We were hassled by people who were trying to earn a buck saving us a seat on the train and directing us through the crowd. Despite being there an hour before departure, the moment the train came in, it was a complete mess trying to clamber onto the carriage and grab seats.

The way that train systems work in Sri Lanka is split into classes; 1st class gives you a seat – you pay for a seat reservation with your ticket (this has to be done in advance) 2nd class is padded seats, if you are lucky and 3rd is… just a gamble. We decided to go for 2nd class and were lucky to have our own window, perfect for our first glimpse of Sri Lanka’s beautiful countryside and journey into The Hill Country.

Throughout the 3 1/2 hr trip to Kandy, vendors get on and off the train at each stop and pass through the carriages selling water and food. Now train food in Sri Lanka is a little more adventurous than British Rail. It was quite usual to have vendors passing through with buckets of curried buns, samosas, curry wraps wrapped in banana leaves (rather amusing the first time you see someone buy a leaf for lunch), chewing gum sticks (sold singularly of course), nuts and oranges. We were soon familiar with the hollar ‘Waddy-Waddy-Waddy-Waddy,’ a call our for anyone wanting to buy curried prawns and fish.

The Travel Bit – Kandy and The Hill Country

Kandy is considered the cultural capital of Sri Lanka. It is further north than Colombo, so the weather is slightly cooler and less muggy. Whilst we were there (second week of April) we were just about to head into the monsoon season which meant that during the day we would have sunny skies with highs up to 30c but then would often have intermittent rain storms lasting anywhere from 20 mins to a couple of hours. The rain is warm though and rather refreshing in my opinion. Having travelled from the from the desert we were more than happy to walk through it.

Drink in the Queens Hotel – a former military base – turned hospital – turned hotel. This is an old Colonial building right on the lake with an old fashioned teak bar next to the swimming pool. It is a little pricey but certainly worth a visit if you’re looking for somewhere to relax and enjoy a drink. The bar opens up on to the pool and garden which creates a lovely setting surrounded by Frangipani and Bouganveilla.

Walk up to the Big Buddha on the hill. It’s pretty big, about 40 ft and you can get some great views from the top.

Visit the Elephant Foundation – there are several elephant orphanages in the northern part of the country and we were advised to visit the Millennium Foundation which was only a couple of hours on the bus from Kandy. It was an exciting little bus drive, we were the only foreigners on the bus and were allocated to the back. Certainly the cheapest way to travel although not the safest and for sure we were a little hesitant as we meandered round the cliff roads as full speed, overtaking cars and tuk-tuks as we drove along. At the Foundation, you are required to pay an entry fee but are then able to ride and bath the elephants. This was one of the highlights of our time in Kandy. 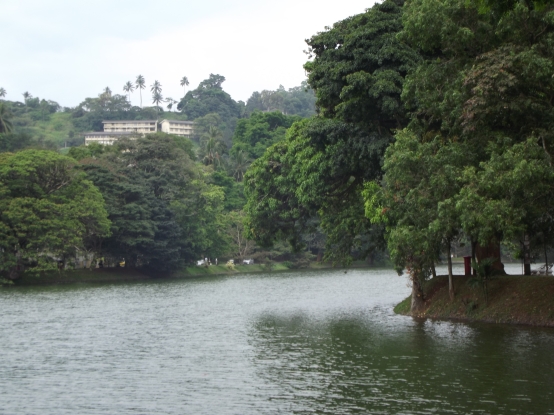 Batique Factories – batiques are hand painted cotton prints which can be stretched over frames. Kandy is the best place to buy these but sure enough you can be ripped off massively for them. Buddhist scenes and animals are the most commons subjects in rich hues of reds, blues, greens, oranges and yellows.

Herbal and Spice Gardens –  Now I’m a pretty savvy traveller, I know when I am being ripped off and I know when I am paying too much but sometimes you just have to go with the flow and pay the role of naive tourist for the sake of keeping the peace.We visited a herb and spice garden on our way back from the elephants and absolutely loved it. We were shown a variety of plants and told about all their healing properties and which ailments they were used to treat. There was something to cure everything, including a natural hair remover and a hangover cure. Surely a great investment.

Traditional Dance – What is says on the tin really. A group of Sri Lankans performed a traditional dance in an open-air theatre to a group of tourists. It was quite cool, the costumes were interesting but the performers were all out of time and it was clear that this was more of a tourist con than part of the authentic Sri Lankan lifestyle. Iz and I were so tired from our flight that we fell asleep 4-5 times lulled by the sounds of the repetitive drumming.

The Temple of the Tooth – yes a temple devoted to teeth. During a special ceremony in the summer, elephants travel into the temple all painted up and its pretty glorious. The temple is right on the lake and looks fantastic at night.

5.10AM train – travelling 3rd class. Fair to say that this was the most testing day of my travelling life. Allow me to elaborate.

– Arrived an hour before departure, having not bought our tickets for a train that only went once a day. 1st mistake.

– Did not have a savvy plan to grab seats. Had paid for 2nd class tickets.

– Ended up sitting in 3rd class.

– On one side we had two distinguished, elderly Sri Lankan men with no teeth. They expertly introduced us to the most eco-friendly packaging ever, leaves. It is rather amusing to watch people trying to eat curry wraps with no teeth.

– Young parents with a tiny baby on the other side of us. The baby screamed for 4 of the 7 1/2 hour train journey.

– In 3rd class you cannot move unless you want to stand for the remainder of the journey. Thus no loo breaks –  thus no food and no drink for 7 1/2 hours on a hot train.

–  Continual shouting of “waddywaddywaddywaddy'” throughout the journey. This actually provided us with great entertainment. It’s a good train game to try and guess what is going to be inside each of the baskets that come round.

– When a baby gets too hot, and Sri Lankan trains get very hot, a baby will cry. When a baby gets hot on a train with no AC, there is only one way to stop a baby crying and this is to cool it down. The most effective method to do this seemed to be for parents to hold their screaming babies out of the window of the moving train. Just close your eyes!

– Despite all this, it must be said, the coastal track down from Colombo, through Galle to Matara is stunning.

The Surf Bit in the South – What is the Matara? 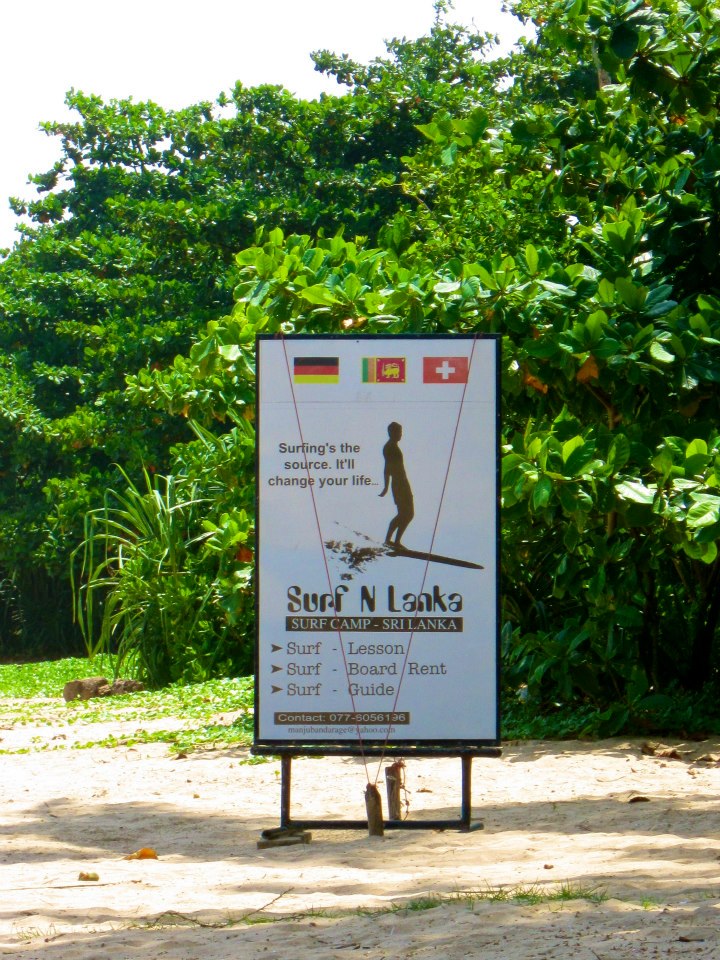 We stayed in Mirissa for the length of our stay in the south. It was a beautiful setting about 20 minutes tuk-tuk ride from Matara. We discovered that accommodation prices and tuk tuk prices were slightly higher in the south probably due to the increase of hippy travellers heading down here and other family holiday makers who wanted a bit of sun away from the cities.

Mirissa has a great stretch of beach with bars and restaurants right on the sand which you can head to for sun-downers and food in the evening. A great find was Number One Mirissa, an upmarket boutique hotel, ‘slightly’ nicer than the places we had been staying in. (The rate is about $400 – 500 a night.) The views were great and the food was fantastic. It has to be said that the food in the south was better than in the north. A lot has to be said about eating fresh fish curry caught of the coast you’re sitting on. 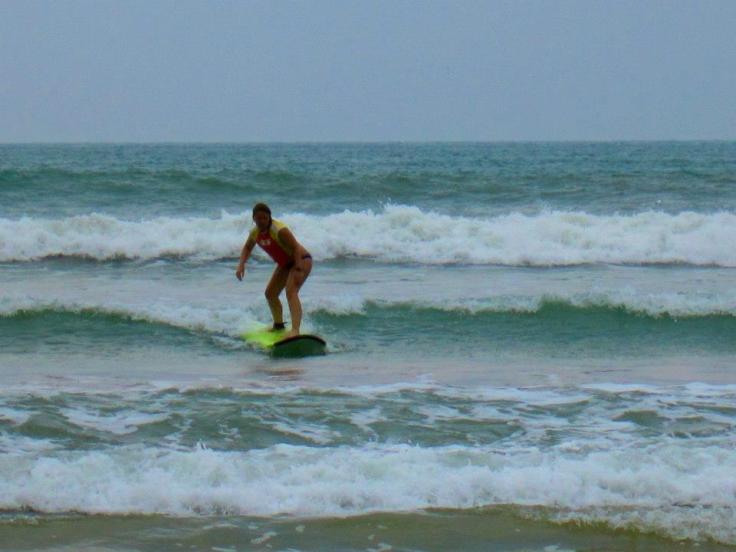 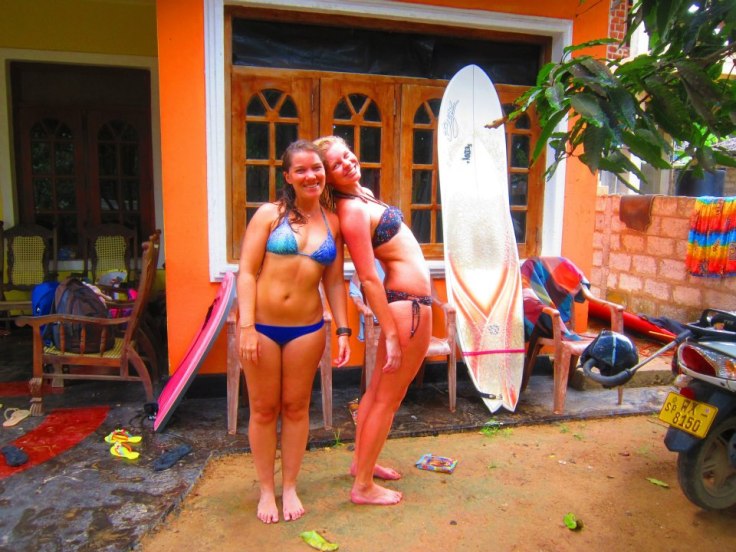 For surfing, we had been advised to head to Welligama. A long stretch of bay with surf shops all along it, I paid about 2000 CRS for my 2 hour lesson and board hire. My teacher Manji was a dude, free-styling the waves at the end of my lesson and gave us a great price for board rental. Normal board hire was about 300 CRS an hour. Peanuts.

Buddhist New Year – We were lucky enough to be in Sri Lanka during Buddhist new year. Fireworks and firecrackers gallore, the country shut down for about 4 days and on New Years day we had the beach to ourselves. Had a surfing session in the monsoon rain too which was pretty sweet.

Other places worth visiting if you’re there are Unawatuna and  Tallalah Resort. You can also go whale watching and crocodile spotting.

All in all it was ace. 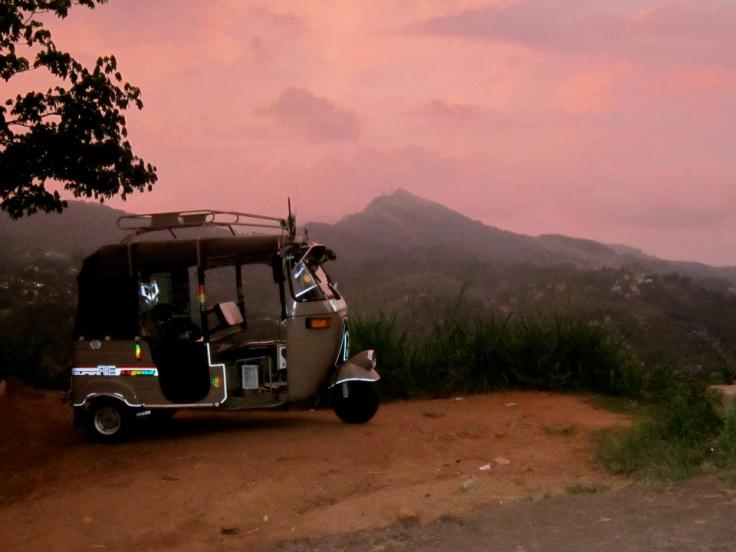 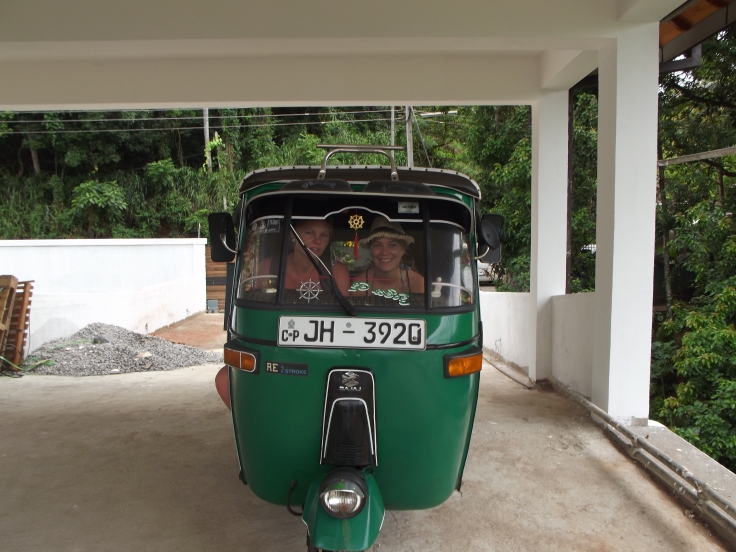